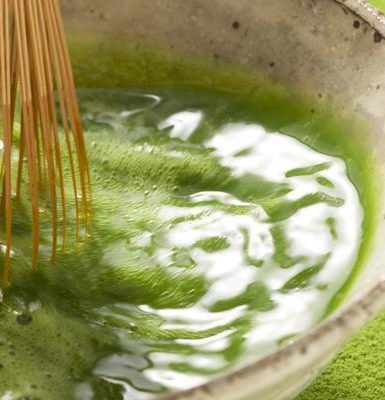 “Welcome to my dojo of life skills. Dojo literally means “place of the way.” This blog shares my “dō,” or Violosophy.” PS, Dō (道) is pronounced like cookie “dough.”

OK, its time to spill some Tea 🍵, literally. A guilty pleasure of this Common-Sensei is my morning iced green tea “Matcha” Latte (w/soy milk) from Starbucks. Why? Its delicious and nutritious of course 😉.

Matcha (pronounced MA-CHA) is all the rage these days, and you can find it’s magic blend in beverages and treats around the world. It’s a trendy spin on a traditional Japanese elixir that Zen Monks have enjoyed for nearly 1000 years. Matcha has been a staple in Japanese tea ceremonies since the 12th century because this ancient concentrated form of green tea is loaded with “ZENsational” goodness… and its mainstream!!

Alas, I don’t make my matcha from scratch (although i should, since Starbucks is an added sugary treat). What I can tell you is MATCHA in and of itself is AWESOME.

SENSEI SAYS: So what is the entomology of the mystical Matcha “抹茶” anyhow?

Being powered or as I like to look at as POWERed is the secret. You see the leaves 🍃 found on the Camellia sinensis (plant) are used to make all green teas across East Asia and the world. But what makes Matcha powerful and magical is how its prepared and grown.

🍃How it’s prepared: Most green tea’s are just infused with a mature leaf. Matcha is instead made from young leaves ground into fine “powder” and then whisked in hot water. Trust me, it makes all the difference.

🍃How’s it’s grown: It is a “shade-grown” shrub where farmers “cover” the plant for approx. a month before harvest to avoid sunlight. Experts say this shade period is what maximizes the chlorophyll content boosting nutrient density.

Now for some fancy technical jargon: The leaves are full of theanine, an L-glutamate amino acid. When the plant is shielded from the sun ☀️, the theanine levels stay high ⬆️ because the hydration used in biosynthesis of catechin is lowered ⬇️. In other words, blocking the sun keeps the amino acid content in the leaves high… And that’s what matters!

7 Reasons to sip this tea:

Obviously tea is known for having a caffeine kick, just like its big brother (Coffee), but not all is caffeine is created equal! How the body metabolizes or breaks down caffeine is often overlooked.

When my neighbor Casey downs her white chocolate mocha, it hits the body pretty hard and fast. In other words, she gets her and immediate fix and spike to the blood stream. Matcha on the other hand has a slow release. So the energy boost is sustained, released over time. You can be fueled for hours on a single cup.

Because Matcha grinds the buds and young leaves 🍃 of Camellia plants, it contains more caffeine than mature leaves used in other green teas. When you drink matcha, you are practically ingesting the whole/entire tea leaf as opposed to just brewed water so you get the full potency of entire stone-ground powder. It’s the best of both worlds!

Those ancient Monks were really on to something when they enjoyed their matcha tea before mediation. Why? Because it’s a calming agent of course. Some claim to feel a sort of “high” or heightened meditative state. In karate we teach mushin (the Japanese philosophy of “no mind.”)

A benefit of Matcha is it’s natural propensity to reduce anxiety and stress. L-theanine is proven activator of dopamine and serotonin which calms the mind by leaping the “blood-brain” barrier. The theanine stimulates alpha waves in the brain, producing a sense of relaxation. It is a clean energy without traditional caffeine crash! So stay calm, cool, and collected with an Iced Matcha.

We all know antioxidants are good because they are natural defenders. I refer to these as “blocks” throughout Common Sensei. Matcha carries a class of antioxidants called catechins, especially one called EGCG (epigallocatechin gallate). Turns out matcha has the highest concentration of these in nature. That’s good news because they have been shown to reduce inflammation and lower cholesterol. EGCG has also been noted to have strong cancer fighting properties. The matcha “blocks” and counteracts free radicals like UV Rays, radiation, and chemicals that can lead to cell damage.

Food for thought: Research at Tufts University discovered that the ORAC level in matcha is 20x more than blueberries or pomegranates.

Sensei Says: Some boast a single cup of matcha contains 137 times the antioxidants of typical green tea. I find that a bit extreme, but but even if its just 10x times better, I’m in.

Matcha is a brain-booster or natural “Nootropic.” NOO What?!? Nootropic is an ancient greek word used to classify stimulants such as coffee and “smart drugs” that enhance mental performance. *Disclaimer: I don’t advocate the synthetic or chemically engineered type. Stick with the plants! Matcha is a unique synergy of Caffeine, Theanine, and EGCG that improves neuroplasticity. Natural nootopics sharpen memory and increase focus. It’s “ZENtastic!”

Many experts gush about the how long-term therapeutic benefits of catechin as it can elevate BDNF (Brain Derived Neurtophic Factor) and NGF (Nerve Growth Factor). BDNF is an important biomarker for improved cognitive health and memory.  Reports have shown a connection of NGF with theanine to help with symptoms of neurodegenerative diseases like Alzheimer’s and Parkinson’s Disease.

When I teach Karate 🥋 we focus on reducing stress and heighten cognitive abilities through Zanshin. A cup of green tea can enhance the experience.

We all can stand to shed a few pounds, so why not let your morning tonic help ya out. Matcha does the work as a “fat blocker” due to our friend EGCG (epigallocatechin gallate) again. It boosts our metabolism and yes, it blocks fat cells.

Guess what, Matcha has shown to reduce levels of “bad” LDL cholesterol while leaving the good alone. Wooza. It also reduces triglycerides, the chemical fat in our blood. Bonus: the flavonoids present in the tea also fight free radicals in the body while helping to enhance the lining of blood vessels. This reduces cholesterol which regulates blood pressure and prevents clotting. By reducing inflammation in body tissue, the blood vessels can remain flexible.

“The most important finding is that green tea may prolong people’s lives through reducing the risk of cardiovascular disease,” Dr. Shinichi Kuriyama

These days with Covid running rampant, i’ll try just about anything to boost my immune system. While there is no forcefield to combat the Corna Virus, it can’t hurt to supplement and I do.

✅ High levels of polyphenols, catechins, and flavonoids aid in defense

✅ EGCG assists your body’s production of T-cells and can fight pathogens.

✅ Flavnoids are a form of anti bacterial defense and can sooth a sore throat. They also fix bad breath 😂

While I love my mainstream Starbucks latte, its loaded with unnecessary sugar. So its just an occasional treat. If you want the full benefits from this super tea, you need to go “old school.” Get the powder and whisk it! But there is no reason you can’t spice it up a bit. I do like to add chai spices: cinnamom, clove, allspice, ginger and cardamom Why, because Matcha is pretty “earthly” on its on.